Hi! Did anyone notice I was posting Blog Updates as 2018? I did that for 2 months without realizing, I’m such an idiot sometimes… anyway, hopefully this one has the correct month and year.

Since I’ve come back from Vietnam I’ve been hard at work on The Thing 2 RPG’s v2.6 update. I’m well into my testing phase and I’m fixing, patching and bug fighting everything as I go. Sometimes new features effect old mechanics or I forget to use my brain or overthink something a lot. I did learn a lot from making the Thing RPG though and I’ve gotten into the habit of leaving myself notes throughout the game events that only I can see to explain to myself why something does something, but most importantly I learned that you should always leave room for new content. When I first started making the game I was in a mindset of only having x amount of items or weapons instead of leaving space by them for extra types thats why sometimes (especially with the skills) newer skills appear further down in menus.

Outside of this not much has changed for me, I’ve been working what shifts I can and I’m still fighting to get a visa for my fiancee. I did have a bit of bad luck the other day where I went to take my driving test and the car had a mechanical fault so I couldn’t take it and now have to wait 7 weeks for a new test. I also want a new Gaming PC but can’t afford that right now so everything is amazing as always.

I might be aiming high here but I’m still gunning for that May 2019 release.
Arteaga has fallen behind with his work a little and I’m unable to pay him after April so I may have to cut some more planned art content which is not great news but after having to cancel PW and everything else going on in my life it’s far from the end of the world.

In good news my testing is going well, I’ve beaten the Tutorial, Avery’s Story, Pierce’s Story, Thing Mode and Survival Mode to 100% on the hardest difficulties (where possible) to try and balance the game and bugfix. I’m about 8 hours in which I don’t think is too bad. I’ve got Prequel, Original and Story Mode(s) left to do on Swedish Realistic difficulty and I’m considering recording footage from them to make a new trailer (the old trailer is really outdated). I’m considering a features overview or something like that but I’m not sure yet. As always the character based on me (Smith) died during survival mode so I’m going to try and keep him alive in Original/Story mode this time but the game seems to single my character out a lot…

Some work has been done on the base engine but it’s still pretty much a skeleton at this point and needs more framework before I can show any gameplay. We’re still sorting out ideas but have a lot of stuff set out as guidelines for ourselves so we are getting there, slowly. The Thing 2 RPG comes first though so until that is complete work on this is a lower priority.

Don’t forget you can join our Discord server and message us directly here:
https://discord.gg/JxFb6Td

Want to help us out? Consider donating:
For more information on Donations go here. 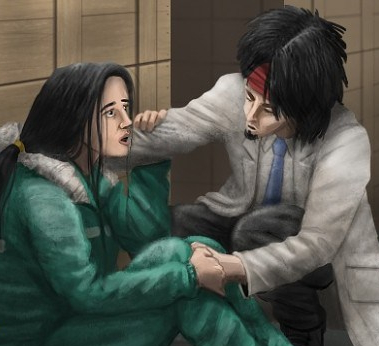 Consider helping us out with costs for less than the price of Lunch. Any amount is appreciated.

That’s about all I have to say for now. I hope that I can fill these blog posts with enough decent information each month to keep them readable. Thanks for reading this and playing my game(s) over the years :)